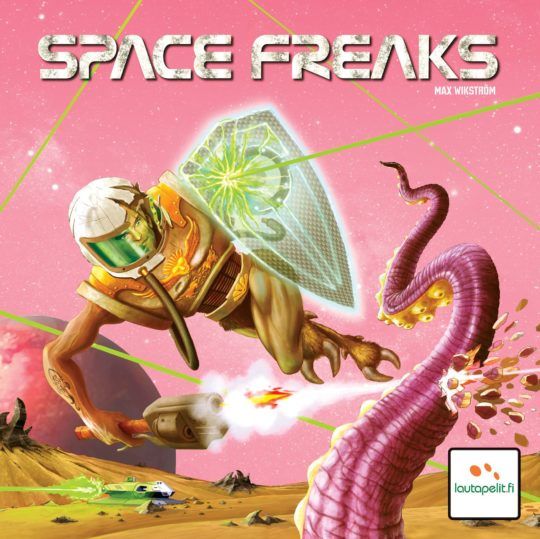 Welcome to the hottest, most cruel show in the galaxy! It’s Friday night battle in the Arena of Annihilation! Stay tuned to see what new tricks our arena master has in store for today’s battle. Here comes the first team. Oh my, they seem to be even uglier than our usual competitors. Who thought it was a good idea to match chain tracks with a poison needle? That team will need a lot of help from their sponsor to have a chance. Look at their opponents, tentacles with anti-matter flail — that’s a classic. Seems like we are ready to start. It’s time to freak out!

In Space Freaks, you are team manager of one of the fighting teams sponsored by powerful megacorporations. Your task is to combine different body parts to design the perfect freak, then lead your team of freaks to victory. The arena is controlled by the arena master, who each turn changes the conditions in the arena. To succeed, you need to complete tasks given to you by the viewers — or just destroy the other freaks and their base. But don’t worry because in Space Freaks everyone wins, either by managing the winning team or by becoming a (body)part of the next winning team!

In more detail, during the game you build your own freaks, one body part at a time, in addition to building turrets, bunkers and droids to aid your team. Your team sponsor might also aid you in the form of items, special actions, or even alien marauders. You score points during play by fulfilling tasks given to your team by the viewers, killing competing freaks, destroying an opposing base, or controlling the center of the arena.