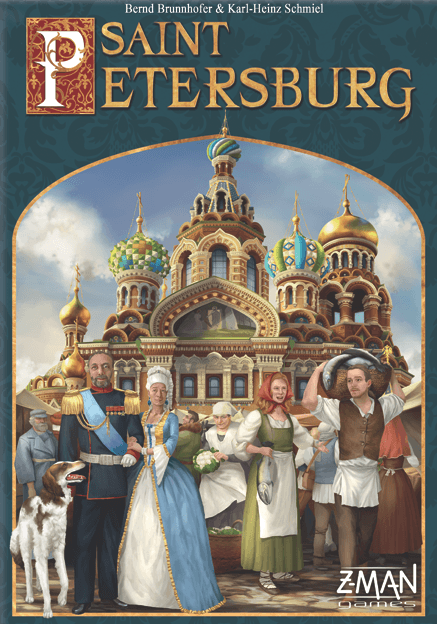 In 1703, Czar Peter the Great founded Saint Petersburg in Russia, which quickly earned the nickname "Paris of the East." The Winter Palace, the Hermitage, the Church of the Resurrection of Jesus Christ, and many other buildings still amaze visitors from around the world today. To accomplish this, he needed a new administration and brought the aristocrats under his control. This was also a golden time for the workers as their skills were much needed to reform and build the new Russia.

In Saint Petersburg, players play important roles in building the city of Saint Petersburg. To do this, they will take turns selecting and purchasing cards from the display of available workers, buildings and nobles. Each type of card has an associated phase, and at the end of each phase, players earn rubles and score victory points based on the cards they have collected of that type. When one of the decks runs out, the players play until the end of that round, then the game is over. Additional victory points are awarded at the end of the game depending on the number of unique nobles that each player has, and the player with the most victory points wins the game.

This new edition of Saint Petersburg features an additional optional module, the Market, which adds a new card type, the market cards, and a new game phase for them. These cards bring in new resources and not only allow for new tactical opportunities, as having a majority in a resource provides extra victory points during the market phase scoring, but also allow for a fifth player to join the game. This edition also includes the two expansion modules from the original edition plus four entirely new modules.