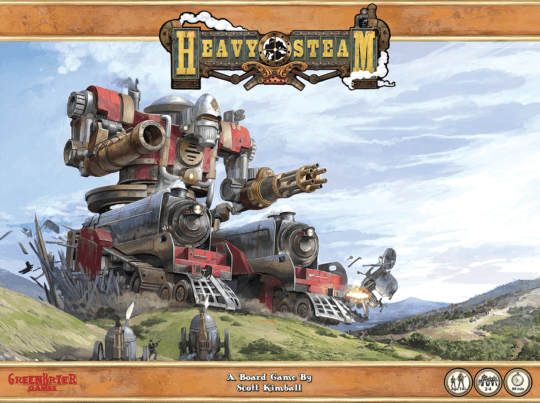 Set in a steampunk universe, Heavy Steam is a game about piloting a giant mechanical humanoid war machine of doom. As a pilot you use the steam titan’s resources to strategically complete scenario objectives. More often than not it’s to defeat your opponent, but you’ve never shied away from a fight, have you?

–In Heavy Steam you play the role of a pilot controlling your steam titan’s systems from the command center inside its head.
–Fully customize your steam titan: choose a robot, recruit your pilot, then customize with weapons of your choice.
–Plan ahead if you want to power your legs, weapons or other systems.
–The battle board is abstracted with easy to master combat.
–Event cards, terrain cards and other cards keep the game fresh and new every time you play.

Play through a variety of focused scenarios or just battle it out until only the champion remains! With several game modes from which to choose, you always face another challenging battle ahead – will you take up the call?