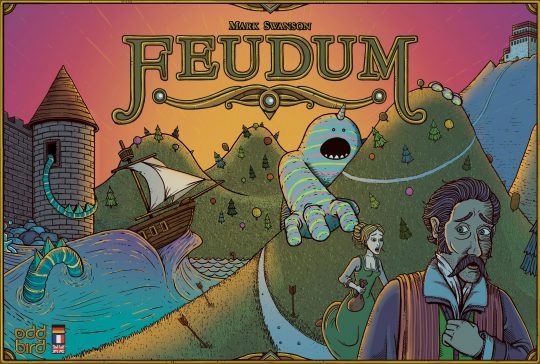 Blimey! You and your blokes have been banished and stripped of everything but a few shillings and table scraps. Undaunted, you journey to a strange land to reinvent yourself and reclaim your honor. Will you farm the earth, fight as knights or finagle your own feudums?

Feudum (latin for fiefdom) is an economic medieval game of hand and resource management for 2-5 players. With many strategies at their disposal, players optimize four actions per turn in attempt to score the most victory points over five epochs.

Each player controls several medieval characters that roam the countryside tending farms, taxing towns and taking outposts in effort to rise in power.

But that’s only the tip of the behemoth’s horn! You will also compete to acquire coveted feudums, which increase your membership status in one of six guilds. But beware! Feudum owners must pay homage to the king through military service or face the charge of disloyalty.

Once a guild member, you will dutifully play your part in a progressive economic cycle, whereby the farmer ships goods to the merchant who equips the alchemist, who invents black powder, which arms the knight, and so on.

If you run your guilds wisely, maintain control of key locations and adapt best to changing events, you will be victorious. Unless, of course, you starve, get sidetracked by sea serpents or develop an unhealthy interest in fermented grapes. Long live the King!