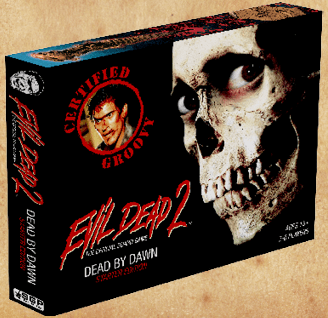 Evil Dead 2: The Official Board Game

Current Offers for Evil Dead 2: The Official Board Game

The Officially Licensed Evil Dead 2 Board Game pits 2 to 6 players against an arcane evil-spewing portal – and each other. Players cooperate to gather pages of the Necronomicon Ex-Mortis to seal the portal before everyone gets a bad case of being dead. Since not even the battle of good and evil is a simple thing, players may also end up possessed! If a player turns Deadite, it’s their goal to corrupt or kill the surviving humans. Meanwhile, those humans can attempt to save their cursed companions at a cost or take them out and hope they stay dead.

Each player’s turn is comprised of three steps, always in the following order: Event, Move, Action. Once each player takes a turn that’s called a round. At the end of each round, all Enemies take their turn:

EVENT
Each player draws an event card which they must immediately play.

MOVE All characters can move up to two spaces in any direction or may choose to stay put. Items and Ex-Mortis Pages on the board may be picked up by moving over them, but characters cannot stop to take an Action and then continue moving. A Character will pick up whatever is on their space before having to take any Action on that space, such as Attacking an Enemy.

ACTION
After moving, the player may make Actions as defined by an Item Card. There is no limit to the number of Actions a Player takes on their turn, given they’re all viable Actions. However, any one specific Action may only be attempted once per turn unless otherwise noted.

WINNING
There are 9 unique Ex-Mortis Pages that form one big picture. However, duplicates of these pages have been scattered throughout the cabin and ground, some with greater frequency that others. The players must gather up one of each in order to close the portal.