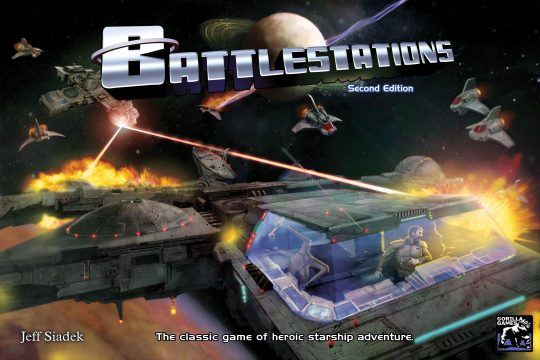 Two obstacles to interstellar flight were solved in the 22nd Century: Hyperdrives to actually get us to other planets, and cloning technology to replace our bodies and brains from backups in the inevitable situation something goes wrong on the trip. Peacetime advancements released the vast resources of a sea of stars like a cosmic piñata. We need capable explorers. The more dangers that present themselves, the more opportunities for lowly travelers to ascend to become true heroes. There’s a lot of emergencies happening on board your starship. Will you be a hero when the time arises?

Battlestations is a tabletop starship simulator – a multi-map board game that simultaneously features ship-action in space AND the events on board the ships involved in the conflicts. It is also a roleplaying game in which your characters grow throughout campaigns, picking up experience points, upgrades, and new abilities.

The game rules are very simple but they allow for complex RPG-like imaginative choices like teleporting to an enemy ship, hacking their helm controls and steering their ship towards a black hole before ejecting yourself out the air lock. Inside the box is an infinity of alien worlds to explore, rickety spacecrafts to upgrade, and a rowdy crew of lifelong comrades to adventure with.

One player takes on the role of “the enemy”, and works against the other players who are cooperating with each other.