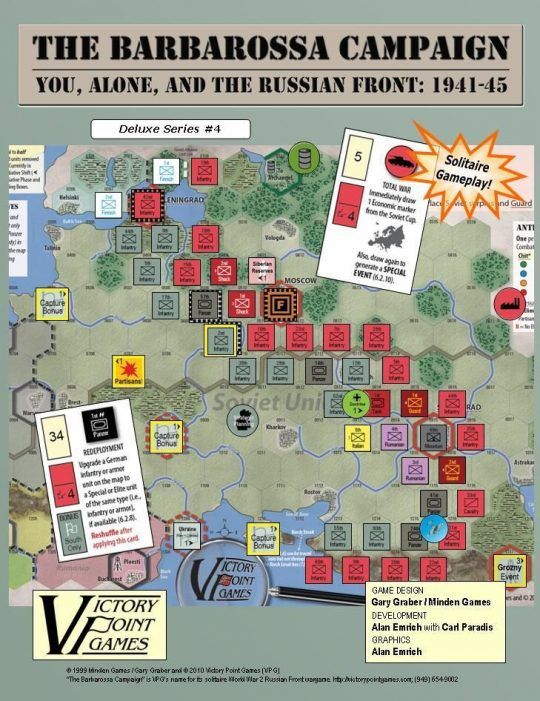 Current Offers for The Barbarossa Campaign

You, Alone, and The Russian Front

The Barbarossa Campaign recalls the titanic struggle on the Russian Front of World War II as no other wargame has presented it before – as a story filled with drama and pathos using a novel new solitaire gaming system that puts you, the Axis Player, in command facing momentous events – some- times history’s master, and at other times its pawn.

Featuring a dynamic game engine, where you must attempt to collapse the Soviet Union against all odds – where the cunning strategies you devise while directing your panzer thrusts eastward or offering fanatical resistance as the Red Army pushes relentlessly back, you will bask in a fresh, new retelling of this epic story each time the game is played.

Plumb the possibilities offered in The Barbarossa Campaign where myriad historical “What ifs?” are constantly explored and where you will be swept away by the ebb and flow of vast battles that can be swiftly mastered after encountering rules of only moderate difficulty. It is time to revel in your hobby again with this fast-moving, innovative Russian Front wargame built for fun and enjoy the “story” in history afresh every time you play it.

Number of Players: 1
Ages: 14 and up
Playing Time: scenarios are approximately 35 minutes each; a full campaign game takes approximately 3-4 hours
Complexity: 5.5 on a 9 scale
Solitaire Suitability: 9 on a 9 scale
Scale: Each unit is 1 to 2 Axis Corps or 1 to 2 Soviet Armies; each hex is 90 miles and each turn is 1 season (3 months) of real time