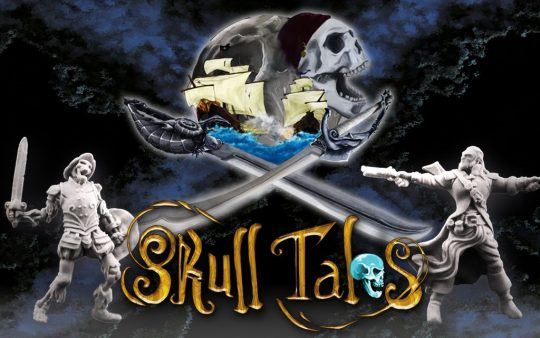 It still smells like burning gunpowder. The deck is completely full of remains of combat after the boarding. We could be enjoying our looting in Isla Tortuga but our Captain insisted on coming to this goddamned island instead.

In the meantime, our gunner ‘Mad’ Harry does not stop telling us stories and legends about some fantastic creatures that dwell in this place. The Doctor seems uneasy, grabbing the hilt of his sword, sweating a lot more than usual after listening to Harry’s tales.

-Old Sanders lost his leg after having cut it himself. He escaped alive from the jaws of that shark-headed abomination in human form …- Harry was explaining at the same time he was miming with all his body doing so, acting out the scene with his eyes moving all directions as if they were about to jump off his face, in a way of magnifying the facts.

-I would not like to lose my leg…or my arm, or any other limb from my body. I appreciate every single limb and organ of mine- was murmuring the Doctor who was more and more nervous. –Do you think there will be more monstrosities like those?

The conversation was interrupted by the sound of two swords pulling out from their sheath together with the cracking in the wood due to a firm step. It was the ruthless Mary Jane who, with a satisfied smile in her face, expressed her wish. –That’s what I’m looking for…

Yo ho ho! Skull Tales is an adventure game in which each player performs the role of a pirate character in order to fulfill any pirates’ dream: to become the ship’s Master and to reach the most precious booty.

Pirates will have to fight against any kinds of fantastic enemies, by solving mysteries, by sailing the Caribbean Sea and exploring islands… all aimed to conquer the highest score in prestige points (PP) and, of course, to reach the long awaited dream of becoming the Master. How is that? Each character will use different abilities to solve mysteries in each scenario or island (by means of modular boards) to fulfill secondary missions; they will roll dice and play cards in order to move, fight enemies or sail depending of how many PP they still have left. All in a cooperative way to escape alive from all this because dead men tell no tales…