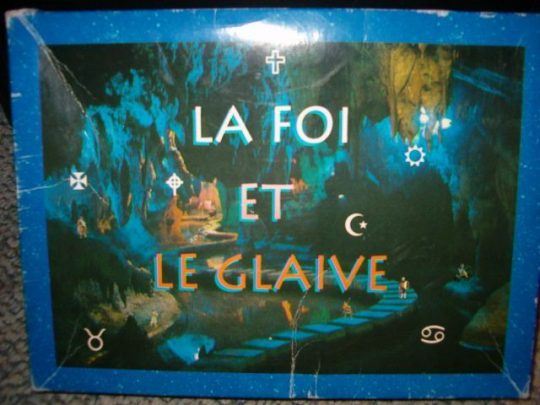 This game was designed by the French club, Vortigern, to be played by correspondence and was later picked up by Azure Wish Edition to be sold as a commercial boardgame. It is a game for six players which combines diplomatic negotiation, warfare, and religious strife. Each player represents one of the primary religions of the seventh century AD: Western Christianity, Eastern Christianity (or the Monophysites), Islam, Zoroastrianism, Norse paganism and Shamanism. As such, one has at one’s disposal missionaries to convert others. However, one also controls the temporal power behind these faiths–the Shamanist player controls the Avars, the Franks belong to the Western Christian player, and so on. Conquering other territories greatly increases the effectiveness of one’s missionaries.

There are also a great number of minor religions, which also have their adherents.

As in Diplomacy, one writes orders secretly (after a round of negotiation) and all orders are resolved simultaneously, with combat as appropriate.