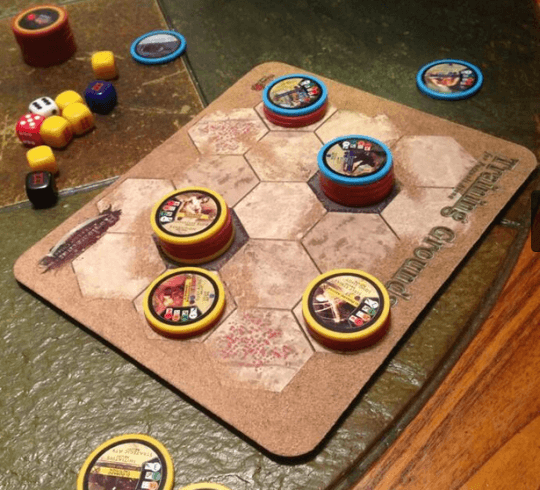 Hoplomachus [ha-ploh-ma-kuss], or "Hoplo" for short, is a hex-based tactical board game set inside a gladiatorial arena. One to four players, each representing an ancient city/civilization thought to have been lost to the world, are now on Rome’s doorstep vying for a place in the prestigious arena games.

Players have a very clear objective: Eliminate the opponent’s champion. Champions start the game in the arena but are inactive and defenseless. They will not fight until the crowd is behind them. Each player takes turns drawing, playing and moving gladiators from their "hand" and assisting them with tactic chips.

Based on opponent’s moves and play style, each person will need to adjust their strategies. Defend your champ, take over and hold the crowd favor areas, assault opponent’s champion, cover deployment zones, eliminate tacticians to reduce enemy options, fight beasts to gain crowd favor, the list of tactical possibilities is endless.

Training Grounds: This is the smaller, faster version of our full, award winning Hoplomachus game. Play, teach, travel, or host tournaments with the Training Grounds if the full game is too much! The Training Grounds features one of each of the basic gladiators and a tactic or equipment. Be the last gladiator standing!