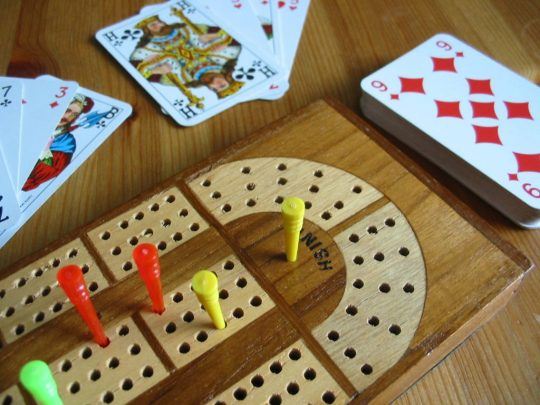 Drueke Cribbage Board No. 1

Current Offers for Drueke Cribbage Board No. 1

Cribbage is a card game invented in the early 17th century, based on the earlier game Noddy. It is played with a deck of standard playing cards and a signature piece of equipment called the cribbage board. Cribbage is traditionally played as a 2 player game.

In the version usually played today, each player is dealt a hand of 6 cards, of which they discard 2 into a special pile called the Crib. One card is then cut from the draw pile and turned face up – it is considered part of each player’s hand and of the Crib. The players then alternately play a card, scoring points for hitting certain totals, or for making sets or sequences. Score is kept by moving pegs along tracks on the cribbage board. This is repeated until all players have exhausted their hand of cards.