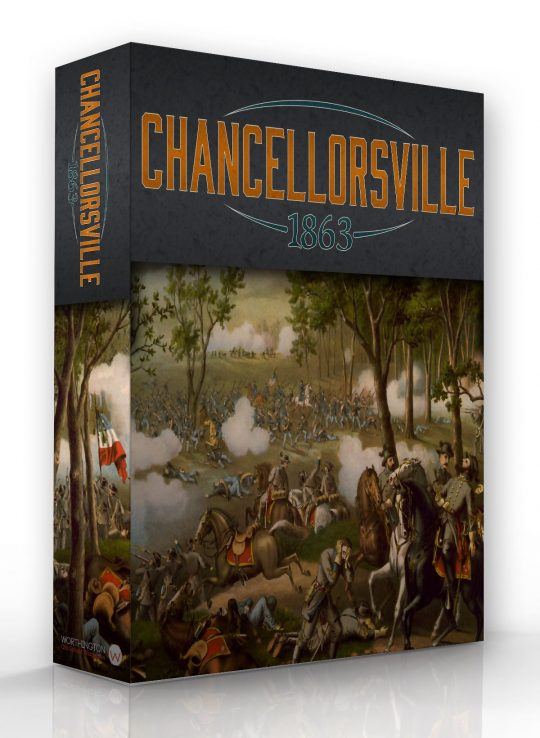 Chancellorsville 1863 is a card-driven game on the American Civil War Battle of Chancellorsville. Playable by 1 to 2 players in 1 hour, the game comes with a card-driven solitaire engine. Designed by Maurice Suckling (designer of Freeman’s Farm 1777), the game uses many of the concepts from that game. However, added hidden movement, much more maneuver, and other design tweaks make this a truly unique game.

Each turn players will play 1 of their 3 in-hand formation cards to maneuver or attack enemy forces, gaining momentum cubes based on the formation activated. Each formation is a Confederate division or Union corps. Each formation card will allow a major and possibly an additional minor activation, major allowing two moves for a formation while the minor allows one move. After each formation moves combat can occur if a move ends in a location with an enemy formation. Tactic cards may be played during the formation’s activation giving it movement or combat bonuses.

At the end of the formation card activation players may spend their momentum cubes to buy tactics cards which may give them benefits in combat or movement in future turns.

Players then draw a new formation card refilling their hands to 3. Hooker, Lee, and Jackson have bonuses that can be played once a game, adding to movement and combat.

Victory is determined by destroying enemy formations through morale/strength loss, or the Union occupying the three victory locations which represent cutting off the Confederate army from Richmond.