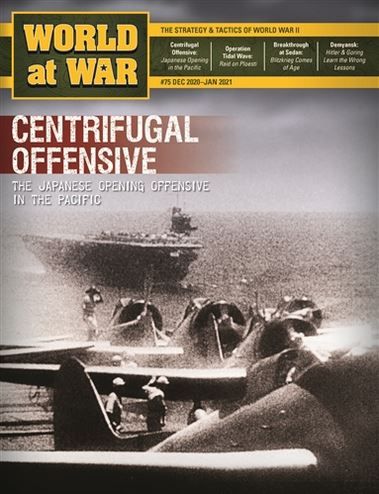 Centrifugal Offensive: The Japanese Campaign in the Pacific, 1941-42

Current Offers for Centrifugal Offensive: The Japanese Campaign in the Pacific, 1941-42

Centrifugal Offensive: The Japanese Campaign in the Pacific, 1941-42 is a solitaire, strategic level wargame of the initial Imperial Japanese campaigns in the Pacific War, 1941 to 1942. The player commands the Japanese forces, with the Allies are controlled by the game system. The player’s objective is to accomplish campaign objectives ahead of the original schedule, thereby forestalling the inevitable US-led Allied offensive. A critical factor in the game is victory fever. The more the Japanese are winning, the greater the chance they will have to attain additional objectives to win the game. Another factor is the game ends before the Allied counteroffensive in the Solomons, so there are no Allied amphibious operations. Most ground units in the game represent divisions, brigades and regiments. Aircraft units represent one to three air groups or regiments (three to nine squadrons). Distances between each space on the map vary depending on location and strategic importance, with the distance varying from 1,000 to a few hundred kilometers. Each turn represents one month of operations.