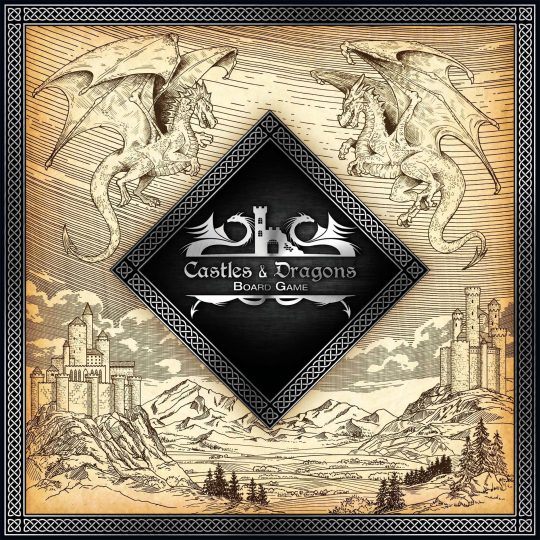 A strategy game with strong economy aspects.
You begin as a Lord of one realm and try to conquer the rest of the world by using your deadly armies or by uniting kingdoms to form a country.
Test yourself in a supply and demand market. Create pacts with other lords to make your way to the crown faster and easier, then break them and destroy opponents by sending spies to their lands. Expand your kingdom by building villages and cities. Protect it by raising castles and wizard towers. Every move you take influences the happiness of your people. When it reaches the top you can form a country, but when it falls to the ground your people will assassinate you. Will you accept the challenge?
â€‹
Rule book will be in three different languages: English, Polish, and Italian

Object of the Game

The object of the game is to “Form a country”. You can achieve this by conquering all the other lands or by raising the happiness of your people to a level that will allow you to do so.

Castles & Dragons is split into 10 turns. The turn track is at the top of the Main Board.
Each turn represents one year in the history of Mortron. A turn is split into 8 phases.
In each phase Players perform their own actions before they can move to the next phase. The sequence of play depends on the phase.

The game will last until everybody has resolved phase VIII in turn 10 or someone has Formed a Country(in which case the game will last one more turn, unless the country was formed at turn 10).

You will get Victory Points from the happiness of your people, buildings and missions you succeed in. If you accomplish all three missions then you will earn bonus Victory Points as will a player who manages to Form a Country.