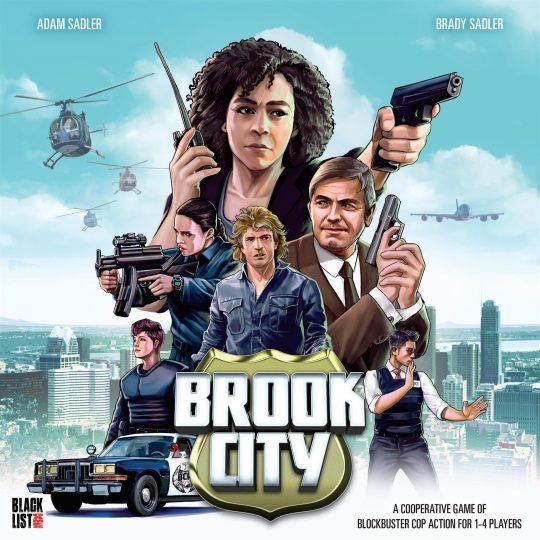 A mysterious criminal element has taken root in Brook City. Known only as "The Syndicate," this collection of ruthless murderers, clever thieves, corrupt politicians, and dirty cops has given rise to a new era of crime. The Brook City Police Department needs the best of the best to clean up the streets of this once peaceful metropolis. So here’s your gun and badge…get to work, officer.

Brook City is a co-operative miniatures board game of blockbuster action for 1–4 cops. Taking on the roles of heroic cops inspired by classic action movie stars, players take their cop decks up against sinister criminal decks and cryptic case decks.

Gameplay focuses on a sprawling game board depicting the mean streets of Brook City. Players must use their chosen cop’s unique deck to race across the city—both on foot and behind the wheel—busting up their chosen criminal’s machinations while simultaneously piecing together the clues to the chosen case.

Brook City thrusts players into a world of big budget Hollywood action, where they can take down dangerous criminals, bust crimes with custom dice, commandeer a variety of vehicles, and solve complex cases inspired by classic cop stories.